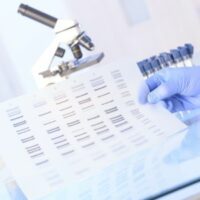 Establishing the paternity of a child is one of the best things for a family unit, providing benefits to the father, mother, and child. However, there are times when one parent does not wish to acknowledge paternity, and the court must intervene with an order for a genetic test to definitively prove the biological father of a child. But what happens if a parent refuses to take part in court ordered genetic testing? At the law office of Blair H. Chan, III our dedicated Tampa family law attorneys can assist with this and all other paternity matters. To learn more, call or contact our office today to schedule a consultation.

What is Court Ordered Genetic Testing?

When one parent disputes the paternity of a child, a Voluntary Acknowledgement of Paternity is not an option. The parent wishing to prove paternity must go to the court and request an order for genetic testing. The genetic testing process is painless and straightforward. A buccal swab is taken from the inside of the cheek of the presumed father and the child. These swabs are sent to a laboratory, and the DNA is compared to determine whether the two are biologically related. If the test comes back in the affirmative, then the man is proven to be the biological father of the child and is granted all the rights and responsibilities that come with paternity.

What Happens if a Parent Refuses?

While the mother is not part of the genetic testing process, if she does not want to acknowledge the father she may try and prevent her child from participating in court ordered genetic testing. Similarly, if a man does not want to admit paternity of a child, he may also try to avoid participating in the genetic testing process. If either parent refuses court ordered genetic testing, there are legal options for the parent that requested the paternity action. The adult that refuses to participate in the process can be held in contempt of court. This can include daily accruing fines and even jail time until the parent agrees to participate in the process.

If the alleged father is the one refusing to participate in genetic testing, the judge may simply make a default ruling in favor of the mother and declare the man the legal father of the child. In order to avoid the responsibilities of fatherhood like child support payments, the man would then need to participate in genetic testing in order to prove that he is not the biological father of the child.

Do you have questions about court ordered genetic testing or about your legal options if a parent refuses to participate in the process? If so, the law office of Blair H. Chan, III in Tampa Bay is here to help. Call the office or contact us today to schedule an evaluation of your paternity claims now.