Can I Get An Annulment In Florida? 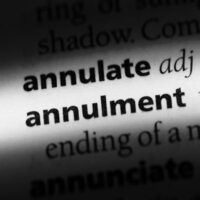 When most couples decide to end their marriage in Florida, they file for divorce. However, in certain circumstances a spouse may be able to claim that the marriage was void or voidable and get an annulment instead. There are very particular rules and laws surrounding annulment in Florida, which is why you should always use a knowledgeable attorney to help with your case. To learn more about whether your situation qualifies for an annulment, call or contact a Tampa divorce attorney at the office of Blair H. Chan, III today.

What is an Annulment?

A petition for divorce is the termination of a lawful marriage, which differs from an annulment that states that the marriage was never valid. As such, when an annulment is granted the court is stating that legally the marriage never occurred. This can create some difficult and complicated situations when separating the lives of two people getting annulled in Florida.

The court is allowed to grant temporary alimony to one spouse while the annulment is being determined by the court, but permanent spousal support after the fact is typically not awarded. However, one exception to this rule is if one person in the relationship was an innocent victim, in which case the court may be awarded permanent alimony and other financial relief as a matter of fairness.

In addition, property distribution is also handled differently in an annulment, with the couple being required to split their property to the best of their ability in order to return each other to their financial state prior to the invalid marriage. If children are involved, the court deems any children born or adopted in a voidable marriage to be legitimate even if the annulment is granted, but children in a void marriage are not considered legitimate under Florida law.

Florida precedent has split the grounds, or reasons, for annulment into two categories: void and voidable grounds. A marriage is considered void if there is bigamy, incest, underage spouses, or permanent mental incapacitation at the time of the marriage that rendered one person unable to consent to marriage. A marriage is considered voidable if one spouse was temporarily mentally incapacitated, seriously intoxicated at the time of the marriage, used fraud or duress, was underage and entered into the marriage without the knowledge or consent of their parent, impotence, or if the marriage was intended as a joke.

If an annulment is granted because the marriage is deemed void, there is nothing that can be done to ratify the marriage. However, if the grounds for an annulment is voidable, one spouse may be able to claim that the acts of the other spouse ratified the marriage and therefore made it valid. To learn more, talk to our office today.

Talk to Our Office Now

Do you have questions about whether your circumstances qualify for an annulment in Florida? If so, call the office or contact us at the law office of Blair H. Chan, III today to schedule a consultation of your case.