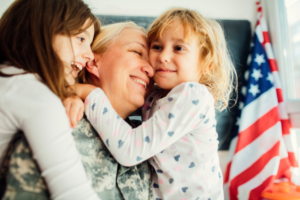 Military families are accustomed to hard work and sacrifice. They know what it means to put personal wants aside in favor of something bigger than themselves. For many service members and their loved ones, this sacrifice is incredibly hard on relationships.

In many cases, lengthy deployments put immense strain on both service members and the spouses and families left behind. According to a study between 1999 and 2008, a staggering 97 percent of divorces occurred after deployment.

Whether your marriage is ending because of a deployment, or you have simply grown apart from your spouse, divorce in the military presents unique challenges. It is important to work with an expert Tampa military divorce lawyer like Blair H. Chan who knows how to handle these cases and the issues you face.

We have served countless military families in a range of family law matters, including divorce and collaborative divorce. We help service members and their spouses, by making sure all potential issues are brought to the table early in the case. We also point out all the special legal issues you need to know due to your status as a military family.

A “military divorce” is not a special type of court proceeding. Your divorce will take place in a civilian court just like any other divorce. Nevertheless, your case is quite different.

Because you have government pay, federal benefits, and obligations that may have taken you overseas and across the country, your case is most likely far more complicated than a standard civilian divorce.

Where to File For Military Divorce in Tampa

As with a civilian divorce, military spouses can usually choose to file where either the husband or wife lives. Further, you may also file in your home of record with the military even if stationed overseas or deployed.

Before you decide where to file, it is important to understand how that jurisdiction distributes marital and any military pensions or retirement benefits.

Although military pension funds are governed by a federal law known as the Uniformed Services Former Spouses’ Protection Act, state law determines how property is divided.

Understandably, many spouses and service members are concerned about how the divorce will impact their military benefits and pay. Generally, child support is set by the court under state law, but that is not always the case.

Most service branches have guidelines that require their members to provide financial support to any dependents prior to the case’s adjudication in state court.

If you are looking for an experienced Tampa military divorce lawyer that has knowledge in Florida law, and one who is experienced in military divorces, then contact us today to discuss your case and learn more about how we can help your family. If you currently live in Pinellas County, Hillsborough County, or Pasco County or in the towns of Tampa, St. Petersburg, Clearwater or Planty City, we can represent you in your Military Divorce as well.