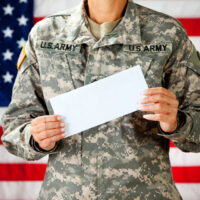 Filing for divorce is never easy, but there are additional complications when one spouse is a military serviceperson. One such complication can be the application of the 10/10 rule when it comes to retirement pay. At the law office of Blair H. Chan, III in Tampa Bay, our dedicated office of legal professionals is here to help answer your questions about this and any other issue that may arise in your military divorce. To learn more, call or contact our office today to schedule a consultation.

In 1982, a law was passed called the Uniformed Services Former Spouse Protection Act (USFSPA), which allowed military retirement pay to be treated like marital property in a divorce. Part of the USFSPA is the 10/10 rule, which dictates where the portion of military retirement pay comes from if the spouse of a military member is entitled to a portion of that money as part of the divorce. Under the rule, if a couple was married for at least ten years and during that time the military spouse completed at least ten years of creditable service, the retirement pay sent to the non-military spouse can come directly from the Defense Finance and Accounting Service instead of being sent by the military spouse after they deduct their own portion.

There are many benefits to both spouses in a military divorce if the 10/10 rule can be applied. Some of the advantages to retirement pay coming directly from the Defense Finance and Accounting Service include no missed or late payments, elimination of contact and problems between former spouses, and the issuance of a 1099 every year so that each spouse can check that they are only getting taxed for their portion of the retirement pay. It is important to note that pay sent under the 10/10 rule only applies to current payments and not to any retroactive amount that the court awards. A spouse given retroactive retirement pay must figure out with the court the best way to collect that money.

Common Misconceptions about the 10/10 Rule

One of the most common misconceptions about the 10/10 rule is that this rule is used to determine whether or not a non-military spouse qualifies for a portion of military retirement pay, but that is not the case. A court can award retirement pay to a non-military spouse even if the couple was married for less than ten years. This rule simply dictates where the pay can come from in a military divorce.

Another common misconception about the 10/10 rule is that simply being in the military qualifies as service for the ten year requirement, but that is not the case. Qualified military service refers to any time of active duty pay and excludes any AWOL time, time incarcerated, and time lost due to an injury caused by the military member.

Talk to Our Office

Do you have more questions about the 10/10 rule? If so, the experienced law office of Blair H. Chan, III is here to help. Call our Tampa divorce attorneys today to schedule a consultation.