Who Gets the Pet in a Divorce? 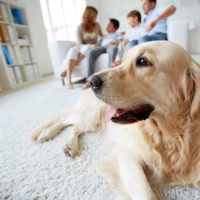 When most people think of the issues involved in a divorce, they consider property distribution, alimony, and child custody; however, one issue that many couples do not consider that can have a significant impact on your life is who will get the pet in the divorce? Some states are now reevaluating the way they treat pet custody in divorce cases, so it is important to understand how Florida courts decide who the pet should live with, especially if both spouses wish to keep it. At the law office of Blair H. Chan, III, an experienced Tampa divorce modification attorney is here to zealously advocate for you and your pet’s wellbeing. Call the office or contact us today to learn more.

Both Alaska and Illinois have begun to consider the wellbeing of pets when deciding custody between spouses. In Alaska, the law states that the court must take into account the wellbeing of the animal and allows for timesharing between spouses along with the splitting of pet care costs. Issues of domestic violence may also be taken into account when deciding which spouse will keep the pet. In Illinois, a similar law was passed in 2018 that requires the court to consider the pet’s wellbeing when determining sole or joint custody of the animal.

Unfortunately, Florida has not passed a law like that in Alaska or Illinois but instead treats a pet like any other piece of personal property. In a divorce, this means that if one spouse owned the pet prior to marriage, it is considered separate property and will return to that spouse. If the pet was brought into the home after the marriage, the court will look at a number of different factors when deciding which spouse the pet belongs to. Some of the most common considerations include:

Extra consideration is made if minor children are also involved in the divorce who have formed an emotional attachment to the pet. In these cases, the court is more likely to award pet custody to the parent with primary custody of the children. Because a pet is seen as personal property under Florida law, joint custody of a pet is not allowed in a divorce. An attorney can help you gather the evidence you need to prove that you deserve your pet in a divorce and make the best possible arguments to the court on your behalf.

For many, a pet is seen as just another member of the family, with significant emotional attachments for everyone involved. For help settling an issue of pet custody in your Florida divorce, call or contact the law office of Blair H. Chan, III today in Tampa Bay for an initial consultation of your case.